His Bolley ancestors in
Northern Burgundy 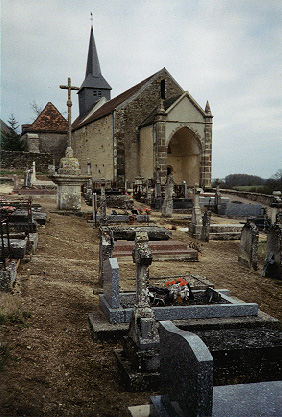 In the countryside on the edge of the Armançon River, the little church of Millery

Laurent Bolley and Marguerite Bertheau, the parents of Lazare, were originally from Millery, a small hamlet about ten kilometers west of Semur-en-Auxois. The genealogical research of Mrs. Viviane Bolley Messelet of Dijon shows that the Bolley and Bertheau families were very numerous at that time in the region of Millery, Menetreux and Collonge.

After their marriage in 1724, the couple established themselves in Semur; Laurent was a shoemaker until 1745, the year of his death. Three other Bolleys, including an uncle, Nicolas, practiced the same trade at that time. In that period, a shoemaker was an artisan, building the whole shoe and not just repairing them.

Laurent was buried in Semur-en-Auxois while Marguerite, having moved to Millery after his death, was buried there in the summer of 1764.

Lazare Bolley was the youngest child of Laurent and Marguerite. They had three girls: Jeanne, Marie-Anne and Claudine and four other boys: Hugues, Philibert, Bénigne and Thibeault. The descendants of these, if there are any, have not been found for now. It seems like they all left the area.

Lazare's grandfather, Jacques (Jacob) Bolley, (1660 - 1741) was a merchant in Menetreux another small town west of Semur. He was married three times and had children with each wife. Claudine Baubis, his second wife was the grandmother of Lazare.

His great-granfather, Luc Bolley, (1630 - 1684), was a carpenter in Millery. At the very beginning of the seventeenth century, five of his brothers had different trades in this same region. Only one was a winemaker.

This history of the Bolleys was made possible by the research of Mrs. Viviane Bolley Messelet of Dijon and Mr. Hervier Collonge of Millery. Both are Bolley descendants.

Today, the only known family among the descendants of the numerous Bolley families of Northern Burgundy, is that of Fernand Bolley, former mayor of the town of Magny-la-Ville during more than forty years. 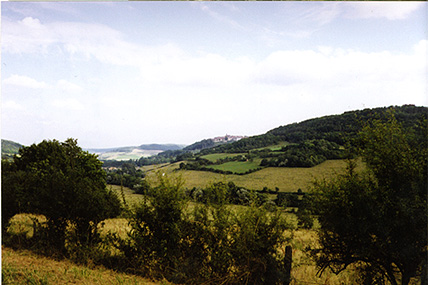 The hills and valleys of the agricultural region of Semur-en-Auxois.

The hamlet of Millery, region of Lazare Bolley's ancestors.

At that time, there were a few winemakers in that region. They have since all disappeared from that area since the "controlled naming" has regrouped grape growing to certain lime-rich slopes of the "Côte d'Or", some 80 kilometers to the south. The towns around Semur-en-Auxois: Millery, Menetreux and Collonge, on the west and Magny-la-Ville, Juilly and Souhey on the east have developed their own agriculture. Today this area contains vast fields of grain, dairy farms and beef cattle.