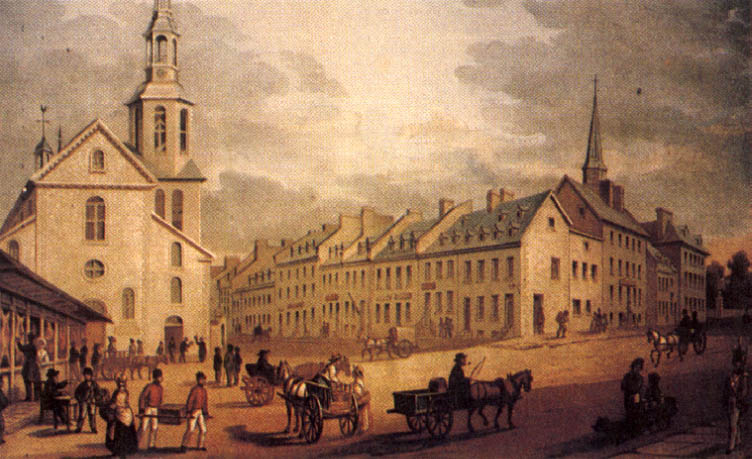 The Notre-Dame de Quebec church as renovated in 1768, after the bombing of 1759. It must have looked this way in 1757 because historians tell us that the renovation was quite faithful to the plans of 1744.

Marie-Charlotte, oldest daughter of Pierre Lanclus and Charlotte Chandonné was baptized in Quebec on January 31, 1733. Pierre Lanclus or (L'Enclus), master shoemaker and merchant by trade, was from St-Brice in Belgium. The Chandonnés, from the LE MANS region of France had been in Canada for a generation and were members of a large military family.

Marie, her two sisters and three brothers, became orphans after the death of their father, when his merchant ship sank in November 1749, and the death of their mother the following March. The Chandonné uncles became responsible for the care of the children.

Married to Lazare Bolley on November 14, 1757 and a mother since August 1758, her life was turned upside down the following year with the disappearance of her husband following the military defeat of September 1759.

Three years later, in 1762, we find this mother and her son living with a cousin in St-Vallier de Bellechasse. In 1781, after the marriage of her son, she came to live with him in St-Henri de Lauzon, today St-Henri de Lévis.