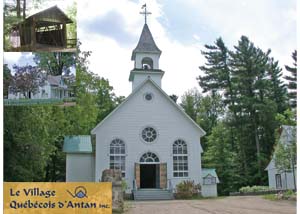 On August 6th 2005, the annual general assembly of the Association of the descendants of Lazare Bolley was held in Drummondville, QC. About fifty people attended this event which permitted the administration council to take the pulse of its members on proposed changes, one being the raising of annual dues in order to permit the association to better serve its members. Most of the attending members, appreciated being consulted on this matter and participated in the discussions at the end of the meeting. As a matter of fact at the end of the meeting, I received this comment from Thérèse, the wife of Iréné Beaulé: “The Beaulés are all the same, they love to give their opinions!” Therefore, we were well served at this assembly.

With the business portion of the meeting concluded, it was time for lunch while being entertained by musicians dressed in 19th century costumes. At that time, our ancestor Jacques, son of Lazare Bolley, lived with his mother Marie Lanclus in Saint-Vallier de Bellechasse and later in Saint-Henri de Lévis.
Believe it or not, Marie Lanclus came to visit us in Drummondville! She was with her sister Geneviève Lanclus! (They were portrayed by Vanessa Beaudry, daughter of Maryse Beaulé and a friend of the family.)

After the traditional French Canadian meal, (for those who didn’t pick the wrong menu!) it was time for everyone to visit, at their leisure, the Old Village (Village d’Antan).
The site is a re-creation of an old 19th century Quebec town with its various wooden buildings and inhabitants (actors in period costumes). The “inhabitants” explain their professions and trades as they show us the use of their period tools. We meet the blacksmith, the seamstress, the carpenter, the notary, the printer, the photographer, the baker and many others. It was very interesting! We were able to learn a lot on their life style.

After a sunny afternoon of visiting the Village, we gathered at the Best Western Hotel for an excellent evening buffet before coming back near the site of the Old Village to see, listen and applaud the show: “Les legends fantastiques” under the stars. A hundred comedians, dancers and singers strived to present us a multi media show. This spectacular show is worth a detour to Drummondville. In all, it was a memorable day enjoyed by all.